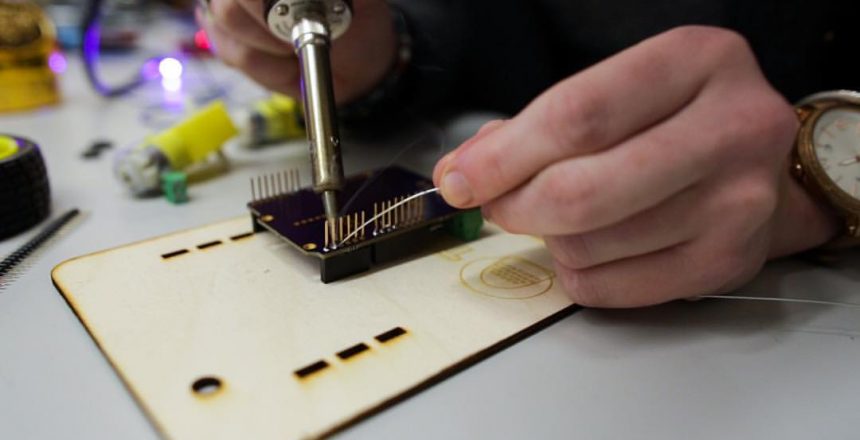 It’s not always easy to get kids excited about engineering projects – when things are too difficult, young students can get frustrated and overwhelmed and may be tempted to give up. Here at Thimble, we’ve found that the key to keeping students engaged in STEM learning is to provide projects with just the right level of challenge!

With the help of a pre-made Arduino board, we’ve developed a number of kits with Arduino projects for kids that let them learn about hardware and software at the pace and difficulty level that’s right for them. By including a beginner friendly Arduino UNO board in our beginner’s kits, we set students up for excitement and success with their first engineering project.

Arduino is an open source platform for electronics hardware and software. An Arduino board, or “breadboard,” is a small, pre-made microcontroller board that can form the basis for an electronics project. These boards allow you to send an “input” – like light on a sensor, a button being pressed, or a message from a computer – and turn it into an “output,” which is anything the board can do or control.

Inputs are connected to outputs by using the Arduino Programming Language, which is a way of sending instructions to the microcontroller board. Arduino starter kits are a great way to get started with DIY electronics and engineering projects that combine hardware (like buttons, wires, and boards) with software (like coding and programming).

What age can you start Arduino?

Arduinos are great for beginners looking to get started with electronics projects. Arduino’s educational platform includes resources for middle schoolers, high schoolers, and college students. With Arduino’s kid-friendly educational resources and Thimble’s Arduino starter kit, your student can start with these projects around age ten or eleven!

Why should kids learn Arduino?

In today’s high tech world, nearly everything we do, use, and touch involves some kind of electronics. Understanding how software and hardware interact using code is critical to being able to navigate a 21st century life.

Learning Arduino also gives kids a powerful sense of agency. Being able to set up their own device and clearly influence the input and output makes them active creators, not passive consumers, of technology.

Since engineering jobs are one of the fastest growing and highest paying careers, the STEM skills kids learn from working with Arduino can set them up for future success in academics and business!

Which Arduino is best for beginners?

Arduino identifies a number of their products as “entry level,” and includes starter kits for those who are new to Arduino. Want a bit more guidance to get you started with Arduino? Thimble’s Course 101: Intro to Engineering & Computer Science includes an Arduino device as well as all of the instructions, guidance, and project materials you need to go from Arduino novice to expert in no time!

What projects can I do with Arduino?

Because Arduinos are open source and flexible, you can do almost any type of electronics project with an Arduino! Anything that uses programming to connect an “input” with an “output” is a potential Arduino project.

Here are some projects included in Thimble’s Creator Set, which includes an Arduino advice and all the materials you’ll need for twelve Arduino projects:

The first project in our 101 Creator’s Kid is a robot friend who reacts to you by moving his arm when you place your hand over a sensor. You can adjust the code to make his arm move faster or slower!

Our Clapper project uses the Arduino’s analog sensor to detect changes in sound level to turn a light on or off by clapping. Once you’ve learned how to set up the sensor and write the code, you can control anything with this type of input!

This musical project lets you use your Piezo Buzzer to play a little melody, which you write into the Arduino’s programming. Want to change the song? Just update the code with the notes and lengths you want!

Once you learn your way around this amazing DIY resource with our beginner’s Arduino kit, you can broaden your electronic horizons and check out other Arduino projects around the web. Or, come up with your own, and share it on our Thimble learning forums!

If you liked our 8-Bit Conductor project, you can check out tutorials on the Arduino website and learn more ways to use an Arduino to make music, like this pocket synth and drum machine or this MIDI controlled slide whistle!

The folks over at STEM Mayhem have designed this Arduino controlled traffic light project that uses recycled materials to create a fully functioning traffic light. You’ll need an Arduino board, LED lights in 3 colors, a potentiometer, 6 resistors, and a battery holder.

The challenge isn’t over once this project is done! This Buzz Wire Game Arduino project creates a playable game that uses the Piezo Buzzer to make a noise if the player accidentally touches the wire. Nearly all the components are already included in our Creators Kit!