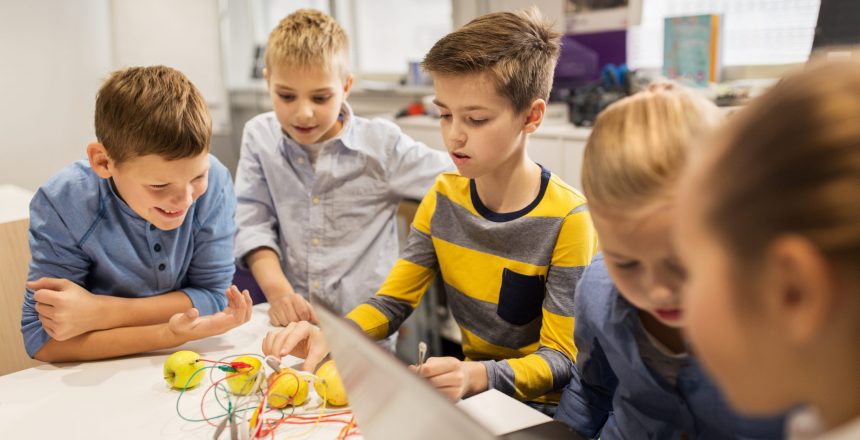 Don’t know the first thing about how to make a video game for kids? We got you.

Let’s take a second and talk about how their desire to create a video game is a good thing.  Their obsession with video games is not necessarily ruining their lives, despite what some may tell you. It might even be steering them towards a lucrative career, and no I’m not referencing Ninja or any other ‘streamer’ out there.  I’m talking about game design, and you should be too!

For some reason (let’s blame grandparents), society has programmed us to associate video gaming with the lazy and unambitious.  Talking about a child’s love of video games conjures images of slack-mouthed, blank-eyed children motionless in front of frenzied television screens and tablets, right?  This idea is perpetuated by a generation of people who grew up with a very small selection of video games, most of which required little skill or imagination.

Today’s video games are nothing short of amazing.  Games like Minecraft and Roblox require creativity, imagination, and a little bit of construction and architecture.  These types of games allow children to build, edit, and create the virtual world around them and then interact with what they’ve created.

Even the notorious Fortnite helps children develop certain skills that nay-sayers probably don’t recognize.  Despite dozens of Youtube parodies poking fun at Fortnite-addicted middle schoolers, the game requires a military-like strategy for a player to survive to the end of a battle royale.  Fortnite also has a “squad” mode that requires young players to cooperate and plan verbally with teammates.  You’ll find them creating and then communicating their squad’s strategy in real-time in order to beat out the other teams. You know all that yelling they’re doing into their headset?  They are collaborating (and maybe begging a friend to revive them).  It’s team-building.  Guys – These are life skills!  Video games today are about more than hopping on mushrooms and sliding down sewer pipes.

It’s a multi-billion dollar industry.  WePC projects the video game industry will hit above the $90 billion milestone by the end of 2020.  Creating video games could land your kid a nice slice of that pie someday.  You could help them take their first step, today.

Most video games follow some kind of plot line.  They’ve got well-developed characters with strengths, weaknesses, and a problem to solve.  There are protagonists, antagonists, and support characters.  The game designers who create these games are performing a magical kind of story-weaving that we did NOT learn about in library class.  It’s this technological storytelling that keeps kids invested in the game, their character, and the outcome. It’s like a choose-your-own-adventure book that they get to interact with.  We would never discourage a child from wanting to write a book, so why would we discourage video game creation? Spoiler alert: We shouldn’t!

Game Development for Kids – Isn’t it a little early?

Many parents wonder if video game design is even a realistic activity for their 8 or 9-year-old.  It seems way beyond their capabilities, right?  Well, not really.  Coding and programming are the basic tech skills necessary for creating even a simple video game.  There is no better time to introduce those skills than when an individual is young.  Have you ever met someone who is bilingual (fluently speaking more than one language)?  They were most likely exposed to BOTH languages in their home or community from the moment they were born.  Coding is like a language, and early immersion creates a better understanding.

It’s never too early for coding.

It is also never too early to foster a child’s interests.  Grabbing onto what your child loves and nurturing that desire to know more about it creates a life-long love of learning.  Did you know that Fisher-Price sells a “Code-a-Pillar” toy that introduces basic coding concepts to children?  Children use basic commands to give the caterpillar a path to follow.  It has over 1,000 coding combinations. The recommended age on that toy is 3-6 years old.  It’s. Never. Too. Early.

Know your options! Is the Video Game Design Camp really worth it?

Let’s take a minute to self-reflect.  As the parent of a game-obsessed kid, estimate your own ability to create a video game.  Is it at a zero? If it is, it’s probably why you’re here.  Most parents are floating in the zero boat with you, and Thimble.io is about to hand you a life vest.

If your kids are anything like most they have limited patience at best.  They won’t wait for YOU to figure out how to make your own video games for kids in order to teach THEM how to do it.  You know your child wants to learn something new. (Woohoo!!)  Now you just have to figure out who can help them do it. Pro-tip: You don’t have to look far. We’re volunteering for the job.

Your local community college and the YMCA are constantly advertising robotics camps and summertime coding camps.  You’ve seen the brochures for this summer’s STEM day-camp. They might even have a camp specifically for video game design. Maybe you could wait for next year’s summer camp to roll around and enroll your child.  Will your child still be as motivated months from now?

While we would never discourage any STEM learning experience, one weeklong summer day-camp isn’t going to do it.  Children’s video game design camps often cost a large one-time registration fee, and participants end up getting a one-time experience.  They need repetition and continued engagement to retain what they’ve learned.

Food for thought:  Do you get irked when your child’s teacher sends home a “summer reading list”?  We’re all thinking the same thing:  All these kids are reading this summer is the concession stand menu at the pool.

But let’s swallow some hard truth: Summer reading lists are recommended because all well-trained educators know that extended periods of time out of practice leads to regression. Skills and knowledge are lost on children as time separates them from that experience.  They need continued exposure.  It’s why the first 4 weeks of school are packed with boring ‘review’.

The same thing applies to the basic skills needed for video game design.  They need to learn the fundamentals, and then revisit and build upon them as they head toward mastery.  Your child CAN design video games.  They CAN create their own games.  They CAN code.  Even if they’re only ten years old, and even if they’ve never done it before.  Thimble.io can show them how, even if you don’t know where to begin. (Hint: Begin with Course 101)

Your child can make their own video game with Thimble.io – And you can get them started today!

As your children work through Course 101, they begin to build the basic skills necessary to become a game maker.  It’s a great introduction to all the juicy basics, and they’ll be able to make their own electronic Simon-like game before it’s over.  Professional game designers had to start somewhere, and your child could start right here with the fundamentals of programming.

What makes Thimble.io different from that toy or summer camp that claims to teach video game design?

The bottom line is, if video game design could be taught in a five-day summer camp, the average salary for a game designer would not be so close to six figures.  It’s a learned skill that has to start with the basics and build upon itself.  Thimble.io is prepared to provide that continued exposure we talked about.  We do this by periodically sending new kits accompanied by live online builds and courses designed for beginners.  Our initial courses are designed for quick wins that get your kid hooked on their own success and leave them asking for more.

The best part is that they aren’t just learning how to create video and computer games:  They’re learning problem-solving skills.  They’re experience success in something they may have previously thought unattainable and building self-esteem from every little victory.  They can make a video game, and you now have the tools to help them do it. Check out projects like our RGB Video Game Controller to learn about the types of STEM projects that our subscribers build!