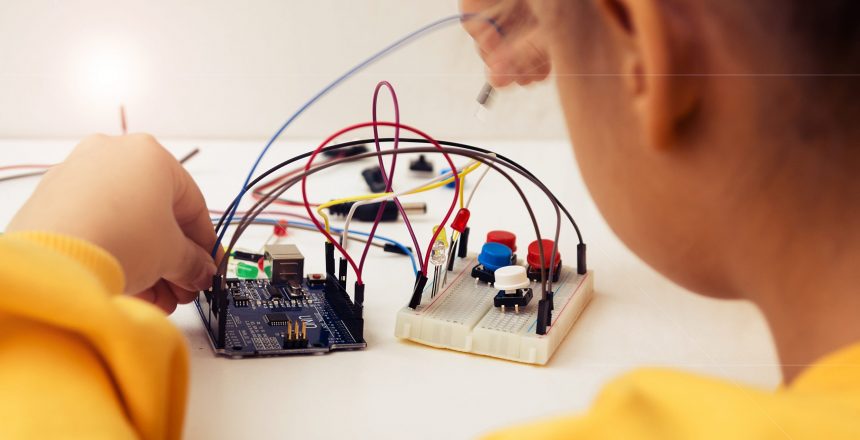 What is it? Why is it? Where is it? How is it? We have the answers.

Arduino is an open-source electronics platform. In the software world, open-source indicates something that can be modified by anyone. It’s “open,” with a design that’s publicly accessible.

Arduino is a great introduction to programming for young engineers. It’s simple in design and easy to use. Arduino comes in the form of a programmable circuit board (or microcontroller) and software that’s used to send computer code directly to the board. An Arduino board (or “breadboard”) reads inputs and converts them into outputs. You get to decide what these inputs are, and what outputs they’ll create! Arduino Programming Language is used to accomplish this.

Arduino was developed at the Ivrea Interaction Design Institute with the goal of empowering students who don’t have a background in electronics or programming. Hence its ease of use and user-friendly experience.

Today, the Arduino platform is utilized for a multitude of different projects, and by a similarly wide variety of people. Students, hobbyists, artists, and even professional programmers all make use of Arduino’s open-source platform.

The case for Arduino is simple: Not only is it accessible to people of all ages, but its adaptability also makes it a crowd favorite. Beginners and advanced programmers alike can benefit from an Arduino-driven project. It also works on Mac, Windows, and Linux – making it all the more available to the masses.

In an educational setting, Arduino is used to build things (think low-cost science projects) or jumpstart programming and/or robotics lessons. Designers and architects can use it to build interactive prototypes – this helps tremendously in showing investors what a finished project might look like. Musicians use it to test out new instruments. See? It’s a versatile product.

Arduino is capable of working in tandem with buttons, LEDs, motors, cameras, and tons of other electronic components. Members of the Arduino community will attest – the ease of use and seemingly unlimited capabilities make it a platform worth using.

There’s no denying that Arduino is an easy tool to work with, but why? Here’s how the popular board functions.

The Arduino hardware is what makes the “board.” There are many different types of Arduino boards (more on this later). A good starting point for beginning programmers is the Arduino Uno.

Any Arduino board will share one trait with its brothers and sisters: a microcontroller. Thinks of this as a tiny computer – it’s the key to inputs being read and, subsequently, used to control different outputs.

Here comes the fun stuff. Arduino software, or Arduino IDE (Integrated Development Environment), is what you download onto your computer and use to program an Arduino board (see: Hardware). So, this means you’ll code with Arduino IDE and then upload said computer code to the physical board. Pretty neat.

And then there was one – Arduino code. As mentioned, this is what you create via the IDE software. For young programmers – Arduino’s code is essentially a version of C and C++ languages. Familiarize yourself with these and you’ll have no problem navigating Arduino (or vice-versa).

Once you have a grasp on using Arduino, it’s fun to experiment with different boards. Arduino has several.

This one’s the top pick for a beginner, and there’s no shame in that! The Uno has all the basics needed to get started on an Arduino project. All you need to do is connect it to your computer with a USB cable or use an alternative power supply and voila! It’s time to get to work.

Leonardo uses one microcontroller with a built-in USB connection, making it a cheaper option. However, cheaper doesn’t mean poor quality! In fact, the board can function as a keyboard, mouse, etc. because of its direct USB. How awesome is that?

On top of a cool (lily pad-like) design, this one comes with connecting pads and a shape that allows for it to be sewn into clothing. Looking to turn your wardrobe into a collection of cool gadgets and electronic devices?

The Mega, as it’s name might suggest, allows for many different digital inputs/outputs. This is a user’s choice when a project requires a large amount of inputs and outputs.

Ready to get started on your very own Arduino project? Look no further than Thimble’s awesome collection of Arduino starter kits that are part of its monthly subscription service for kids! Thimble’s first kit, the Creator Set, is a great way to get started.

Our first project is featured in Thimble’s 101 Creator’s Kid kit. “Robot Friend” allows you to construct a small robot whose arm will move when you move your own hand across a sensor. Adjust the code and make the arm move faster or slower!

This project tests Arduino’s analog sensor and its capability to detect variations in sound levels. In doing so, the Clapper is used to operate a light switch….all by clapping!

Trying to unleash your inner-musician? Thimble’s “8 Bit Music Conductor” gives you the opportunity to use an electronic component known as a “Piezo Buzzer” and program your own melody. It’s science and art, all in one.

Using Arduino is an awesome way to get your feet wet in the programming world. We hope this guide has been valuable and are here to help you start exploring the world of Arduino!