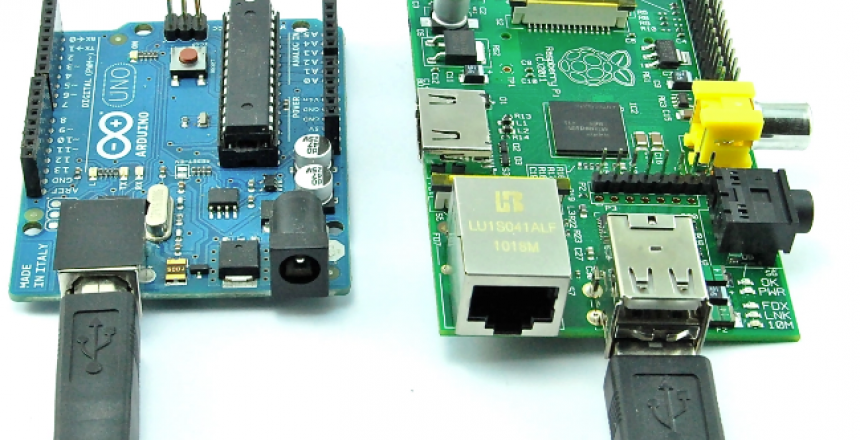 What is an Arduino? What is a Raspberry Pi? Development boards can help bring a simple DIY tech project to life. However, when it comes to choosing the appropriate board, understanding how they differ can be difficult.

Don’t worry, Thimble’s here to help. Today we’re examining Arduino and Raspberry Pi. Both are primetime tools for beginners, despite being their own unique platforms with individual components and functions.

The Basics of Arduino & Raspberry Pi

We recently wrote an extensive piece on Arduino, explaining what it is, how it works, and noting a few of Thimble’s very own projects that can be completed with it. If you’re new to Arduino, give it a read here.

The easiest differentiator between Arduino and Raspberry Pi is that the latter is more complex. In fact, Raspberry Pi is basically a mini computer, whereas Arduino is a microcontroller. It has to be plugged into your computer in order to function. Arduino’s most recent model, the Arduino Uno, can be used in several different capacities. It works with PC, Mac, or Linux and is the perfect tool for beginners looking to pursue simple electronics projects.

On the other hand, Raspberry Pi is a popular choice when your project requires a real CPU in order to get the job done. Building complex robots from scratch (that require more coding and a powerful processor), programming a device to handle multiple tasks, and/or completing intricate calculations all benefit from Raspberry Pi’s operating system and functionalities.

The best way to determine which development board to use is by assessing your project goals. Check out a few of our Arduino projects to a get a sense of where your project falls. In the meantime, here are a few additional technical specs to consider when comparing Arduino with Raspberry Pi boards.

Note that these are basic (but variable) differences, depending on the model you purchase.

Arduino’s core comes in the form of an 8-bit microcontroller. Raspberry Pi has a 64-bit microprocessor.

Here’s where Raspberry Pi really surpasses Arduino. The simpler board comes with a USB-B port that allows for it to be plugged into a computer in order to transfer new programming. It also has a set of I/O pins (complete with analog sensors) and a power input.

Again, this isn’t to say that one is better than the other. Quite the contrary. Arduino is the beginning programmer’s board of choice, but more complex projects tend to require more capabilities. Raspberry Pi provides those.

One Now, One Later?

Chances are, if you’re a young programmer, you’ll eventually find yourself using Arduino and Raspberry Pi. It’s a natural progression, with most choosing to start with Arduino due to its accessibility and simple functionality.

At Thimble, we offer a variety kits, projects, and course modules to get you started with programming. While we use Arduno first, we eventually introduce Raspberry Pi to give you a continuous to more advanced hardware and programming. There’s no better time than now to learn how to code. Let’s get started today!